During the London Australian Film Festival at the end of June, I gave an interview for Tales of Cinema, a series of half-hour programmes on different aspects of the cinema, produced for London-based Al Araby Television. The episode in which I featured was broadcast to audiences across North Africa and the Middle East on August 6, and is now available to stream.

This episode focuses on Britain’s relationship with the film industries of its former colonies (with a particular focus on Australia), and I discussed Britain’s varying cinematic approaches to different kinds of imperial spaces, and the significant legacies of British cinema and culture in white settler spaces. The interview took place at Regent Street Cinema during the London Australian Film Festival, for which I am Co-Programmer, but my contribution was primarily an academic one, providing a historical and cultural context for the discussion.

I’m glad to say, however, that the episode does includes some vox pops with members of our brilliant festival audience (including the executive producer of Top End Wedding, Glen Condie). Also featured is an interview with Australian filmmaker Imogen McCluskey, whose brilliant debut feature Suburban Wildlife closed this year’s festival. Also featured in the episode is Michael Walling from Border Crossings / Origins and filmmaker/photographer (and my KCL colleague) Sonal Kantaria. 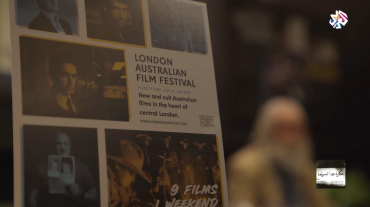 The full programme can be streamed on the Al Araby website,
and is presented in Arabic, with interviews in English (with Arabic subtitles).